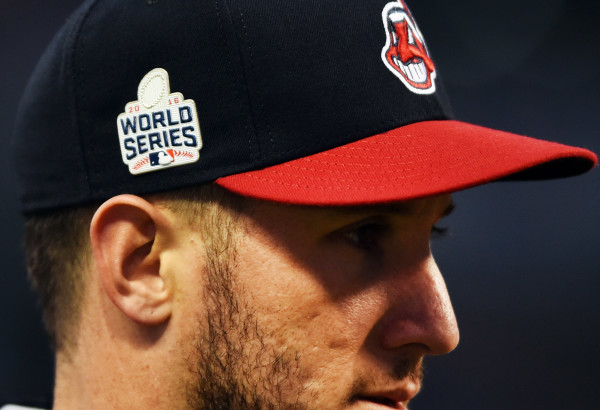 Not meant to be anywhere near as darkly humorous as Boston’s celebrated “Curse of the Bambino” or the Chicago Cubs’ concerns about curses related to a billy goat or a reviled fan named Bartman, a curse from the late Native American political activist Russell Means was put on the Cleveland Indians baseball team for its inappropriate nickname and racist caricature logo/mascot, Chief Wahoo.

His curse specifically directs that the team make it to the seventh game of the World Series, with a three-run lead and lose on a walk-off grand slam on the very last pitch thrown. He wants the loss to be that excruciating for the city and its fans.

And, you should know, it was as early as 1972 when Means first condemned the Cleveland team. Of course, back then no one was ready to listen.

And, you should know, it was as early as 1972 when Means first condemned the Cleveland team. Of course, back then no one was ready to listen. If Cleveland isn’t, I’d suggest it deserves to face not only the Curse of Russell Means but the Curse of Louis Sockalexis, as well.

I am the author of “Baseball’s First Indian,” a 2003 biography of Louis Francis Sockalexis, and the man who was welcomed in 1999 to help the Cleveland franchise and then-director of communications, Robert DiBiasio, correct a bevy of errors on the Sockalexis biography in the team’s annual media guide. It was so bad DiBiasio didn’t even know if Sockalexis’ middle initial was “F” or “M,” thanks to misinformation from Sports Illustrated, including two error-riddled articles in 1973 and 1995, plus a short web bio that listed his middle initial as “M.”

Sockalexis, Penobscot tribesman from Indian Island, Maine, was the first-known Native American to play professional baseball, breaking a color barrier 50 years before Jackie Robinson and suffering pervasive racial prejudice, though he never is properly acknowledged for having done so. And, yes, it was Sockalexis who definitively proved the inspiration for the team’s nickname.

Sadly, the Cleveland professional baseball team only uses the story of Sockalexis to attempt to justify its use of the nickname and the racist image, Chief Wahoo.

Here, in a nutshell, is the real history.

When Sockalexis joined the Cleveland Spiders in March of 1897 for spring training, his very presence set off a wave of wholly acceptable racist sportswriting in the four Cleveland newspapers of the day. Sockalexis was frequently labeled “a savage,” accounts replete with all the overworked cliches about “going on the warpath” and “scalping opponents.” Nothing written about him was the least bit respectful, and he was treated like a curiosity, a circus act. Thus, nothing about the use of nickname “Indians” or [player-manager Patsy] “Tebeau’s Indians” was meant to be flattering or respectful. It was only when Sockalexis was the sensation of pro baseball for the first three months of the season that he made the nickname “Indians” into something of a backhanded compliment.

Ultimately, in the fall of 1914, after running through a colorful array of nicknames, owner Charles Somers determined he wanted an official nickname, especially since the departure of star player (and future Hall of Famer) Nap Lajoie rendered the existing nickname of “Naps” completely obsolete.

Thus, the editors of those four Cleveland newspapers were charged with the task of coming up with an official nickname by Somers. They chose “Indians,” but nothing in the news accounts mentioned the original use of that nickname nor was Sockalexis mentioned.

Fortunately, an editorial in the Cleveland Plain Dealer in January of 1915 credited Sockalexis, by name, as having inspired that nickname in the first place.

It was in 1947 that a young artist came up with the design, a drawing of a Native American figure to serve as a logo/mascot for the team. It was crude and a very stereotypically unattractive rendering of an Indian; indeed, comparing this original Chief Wahoo with Nazi renderings of Jews in the 1930s shows them to be frighteningly alike.

After Cleveland won the World Series in 1948, the use of Chief Wahoo grew in popularity and it was in the early 1950s that the cartoonish version used today evolved. And, yes, ever since Chief Wahoo has been grinning his racist “Little Red Sambo” smile the team has not won a World Series.

Thus, it should be very apparent that while the team continues to say that the nickname and the use of a Native American icon as a logo/mascot symbolizes the club’s connection to history and Sockalexis, it is a deliberate and painful perversion of the truth. The nickname never, ever was meant to honor him or even show him proper respect, and, of course, Chief Wahoo on the caps and sleeves of Cleveland players no more pays tribute to Sockalexis than the image of Little Black Sambo would honor Jackie Robinson if the Dodgers were to suddenly feature such images on their uniforms and for purchase in their gift shops.

Just a walk around the grounds of Cleveland’s Progressive Field makes very clear how little respect the team has for Sockalexis: A statue exists for Larry Doby, the second African-American to play in the Major Leagues, but there is no statue for the first-known Native American player, the man who inspired the team’s nickname; instead of a portrait of the young, vital, five-tool player Sock was, the team presents the sad, old man portrait of Sock, the one taken one year away from his death; and while the team gift shop offers wave after wave of caps, jerseys and bobblehead dolls featuring the likeness of Chief Wahoo, there is absolutely nothing with the name of Louis Sockalexis or about him for fans to purchase.

Yes, Maine and New England fans should have great admiration for Terry Francona, Mike Napoli and Andrew Miller, but we cannot and should not hope the Dolan family ownership and the Cleveland team escape the destiny of Russell Means’s prediction, for the injury of using an inappropriate nickname and racist icon and the Curse of Louis Sockalexis, for the obvious affront to his legacy and perverse use of his history.